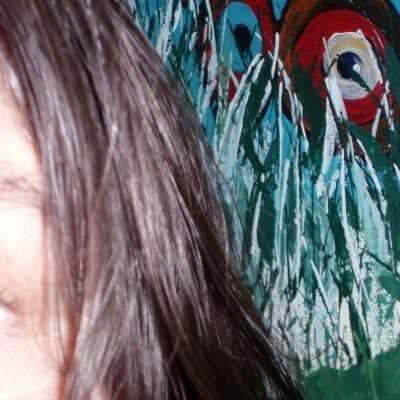 As my username suggests, I am in transit. On just about every level or front.

Some background first. I am an old duck that somehow survived the 80s relatively intact.
I am, for the most part, attracted to the mind, so mega geeky types appeal. Looks aren't so important, hygiene is & most importantly, kindness.
We can all be kind when mindful, but is it innate?
I've always been super considerate & intensely sensitive. I'd prefer this to be part of your essential inner nature also.
I am currently somewhat semi-retired, looking to find a place to really call home & open to a whole range of possibilities. I have a blank canvas before me.

Have experienced way more than the average person does in a lifetime & I'm only just warming up.

Mostly been in lesbian relationships since 18y.o, & very passionate ones at that, with the most stunning woman. I am a very lucky gal.

Used to be an avid traveler, staying a little closer to Oz for the time being, but I tend not to rule out any possibilities for just about anything.

Recently widowed, most likely will never be free of the utter grief that can grip me at times, but learning to accept it as it is. Likewise, have always held a most positive view about all of life's little challenges even when they are really very bad experiences such as death or other types of trauma.
Speaking of which, I do have PTSD, OCD anxiety disorder, it's all very well managed, I have a wonderful network of friends, family & professionals alike.

Lived in a variety of places & have seen even more, kind of lost count but here are a few stand out examples to give you an idea of what makes me me.

I briefly lived within the USA (State College Pennsylvania, Hot Springs Arkansas, Missouri & others) on & off for about 5-6 years with my late wife who was the love of my life. She was so very interesting, eidetic memory, super geek, part Native American, part Japanese/Hawaiian, part Irish, raised in the Ozarks USA & intersexed/transgendered. She passed away 3 years ago, before we "officially" tied the knot (we unofficially married in Hot Springs).
Since her death I've used Melbourne, Australia as a base to re-calibrate & center myself from this major life event.

Way before we met, I lived in London, Amsterdam (I'm part dutch). Have spent a great many months at a time in places like Utrecht, Istanbul, Athens, & a few days/weeks here & there in various towns/cities/regions like Penzance, Brugge & Brussels in Belgium, Paris & Lyon in France, Tarragona & Barcelona in Spain, the Peloponnese in Greece, Northern Italy, Scotland, Switzerland, Austria, Germany etc.

Sailed for a month in the Indian Ocean on a 50ft ketch, bare-boat, no fridge, shower or even computer navigation etc . then we stopped at an uninhabited island in the Maldives to snorkel just about all day, every day for a couple of weeks, before sailing back to civilization again...

On one of the most labour intensive experiences, I've built a rather large art studio/boat shed/cottage with my bare hands, in a mish-mash Scandinavian/Germanic/English seaside cottage style. Has big thick cypress load-bearing timbers, some mortice & tenon joinery, half-timbered/half brickwork with the upper section clad in vertical timber painted bright fire engine red. Use it as a dedicated art studio now that the timber boat has gone.

Have always dreamed of buying some acreage & building a number of small dwellings in a village type atmosphere, experimenting with different methods of construction using materials such as mudbrick, strawbale, rock/stone, rammed earth, recycled timber.

Trying to sell as many of my possessions as possible & only keeping those that rate on a sentimental scale, (unfortunately, in this regard, I am quite the nostalgic, so there are quite a few of these items) but essentially clothing, pillow, blanket, usual amounts of the bare necessities, book or two & only minimal amounts of the want items which I will store with my best friend anyway.
I did this exact thing when I was 28 & it really was the most liberated I'd ever felt to date.
I’m really good at expressing myself.
The first things people usually notice about me is my very gentle spirit and my light green eyes & that I am rather quiet and shy at first but... be careful, I can bite when I need to when pushed, though not terribly hard. ...unless you want me to ;)

I would say I'm not at all a typical girl, certainly not girlie, rather a tomboy.
I'm fairly chilled & relaxed mostly, unless major stress is activated, you know, death, loss, people being nasty, greedy, abusive, violent etc. then I do tend to arc up. If you ever hurt an animal you will see a fire breathing dragon rise from within & I should then wish to rip your head off with my bare hands...
Generally, my friends describe me as being pretty chilled-out, easy-going, incredibly open-minded, kind & gentle, no-nonsense honesty & quite blunt if all else has failed. I will usually confront unfairness or abuse. In doing so I'll always initially opt for the most gentle route & be quite patient about it & endure quite a bit at first.


I am absolutely obsessed with the Walking Dead TV series, usually download each episode & watch a few times over or binge on one episode after another periodically, otherwise, not a big tv watcher generally.

I have a tonne of movies on hard drive, way too many faves to list here.

My music taste ranges through all genres, even some country (the folk sounding country really), at the moment I'm loving the XX, Florence and the Machine.

Collecting comic books is of interest, though these are being sold off too!

Favou rite food... Bring it on please. Not offal, but just about everything else is in!

I spend a lot of time thinking about all manner of things from science to sex...
but mostly it's all about the love. past, present, future...
& humanity.
kindness.
nurturin g.
nature and animals.

I've always dreamed of a simple, self-sustained lifestyle, but with all kinds of adventures, like being able to live-aboard a vessel permanently, & snorkeling & being naked as much as I can every day.

Love kissing, trailing my fingers over a body of soft skin, talking without words, falling in love.

True freedom of diversity regarding sexuality & gender identity on a spectrum scale is incredibly important to me as is how well we tend to each others needs to define our own sense of humanity, emotional intelligence etc.

I am a voyeur... and especially enjoy watching others risk being caught out by random strangers doing certain sexual activities in public places...

I do not smoke, it's disgusting!!

I appreciate difference when it is non-violent & those that can identify as emotionally intelligent beings.

I absolutely love animals so much that I'd rather not eat them, though on rare occasions I do.

Last visit: Visible to members only!

Connect with sexy singles near you